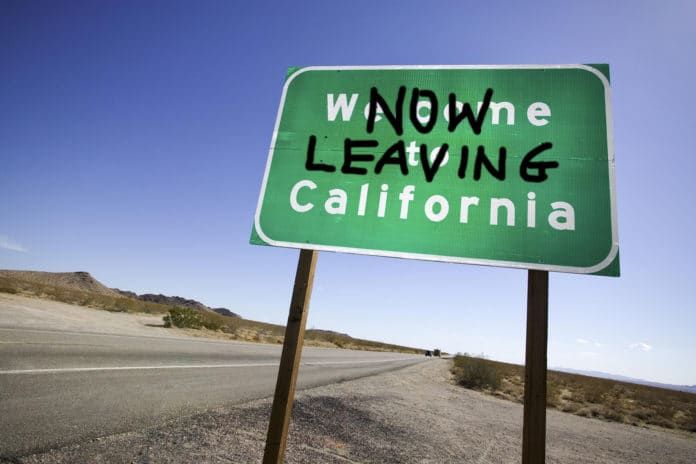 High Taxes, Cost of Living Driving Businesses Out of California

The trend of businesses fleeing the state of California has carried over from 2020 to 2021. A study released by the Hoover Institution at Stanford University revealed that California businesses are moving their headquarter locations at “twice the rate for 2020.”

The study reports that the primary motives for businesses fleeing the state include “high tax rates, punitive regulations, high labor costs, high utility and energy costs, and declining quality of life for many Californians which reflects the cost of living and housing affordability.”

“Our findings indicate 265 companies moved their headquarters to other states just in the period from January 1, 2018, through June 30, 2021, based on the date of the announcement or date of documentation with the state, whichever came first,” the report reads. “The losses are accelerating in that such relocations in the first half of 2021, which total 74, exceed that for all of 2020. Every month in 2021, twice as many companies are relocating their headquarters as in the prior year. The half-year monthly average for 2021 also significantly exceeds the monthly averages for 2018 and 2019.”

Meanwhile the report claims that Texas remains the most popular relocation state for California businesses, followed by Arizona and Nevada at two and three.

The report also argues that California’s labor costs are driving businesses out. It asserts that that is a primary reason for why the cost of living is one of the highest in the nation.

“Labor costs are high in California, which partially reflects the fact that California’s cost of living is so high,” the report reads. “A high cost of living means employees will move unless their paychecks compensate them at least in part for higher living costs.”

The Orange County Register warned of this situation about a decade ago.

“Unless California reduces its hostility toward business, we will see more commercial enterprises seeking friendlier locations in which to relocate entirely or at least place facilities there that used to be located here,” the Register wrote ten years ago.

The study says unless California’s policies alter, businesses will only continue to depart, taking their tax dollars with them.

“Indications are that California’s business environment will continue to worsen. The only question is, ‘To what degree,’” asks the study.